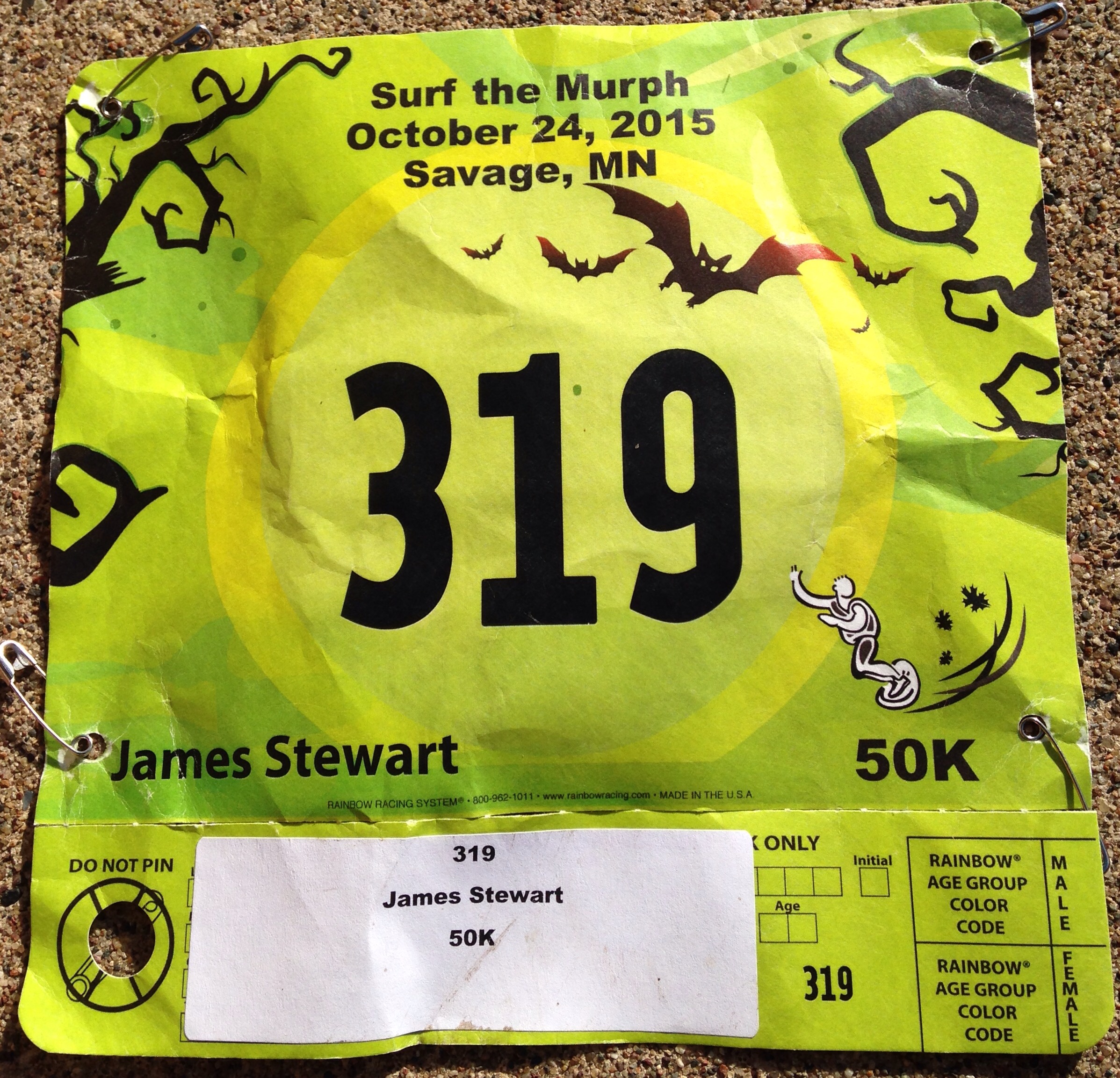 As promised, here’s the update from my first attempt at an ultramarathon (and my first race). In short, I failed. The race was 33.4 miles, and I made it 22.3 before my body shut down and gave me the finger. If you want more detail than that, read on. 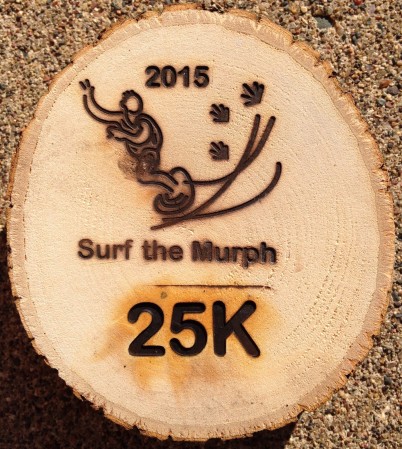 I was credited with finishing the 25K… 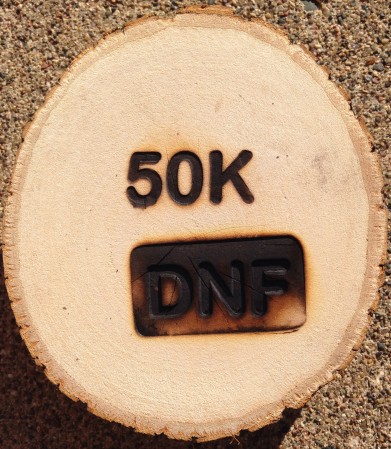 …but the 12-year old who was branding the plaques wanted to make sure I remembered that I DNF (Did Not Finish) the distance I had signed up for.

First, I have a confession to make. I lied about my training plan/progress to everyone who asked. If you’re one of the many friends or family who asked how long my longest training run was, the answer I gave you was somewhere in the 19-22 mile range depending on what number popped into my head first. Don’t be offended – I had a good reason for the deception. Frankly, it was easier to say that and move on with the conversation than to explain that after working up to a single 11.61 mile jog about 3.5 months ago, my knees were in such agony that I had to drastically reduce my mileage and just hope for the best on race day. I tried the honest answer a couple times, but the raised eyebrows, verbalized doubt, and unsolicited advice were annoying.

I really didn’t know what was going to happen yesterday, and I didn’t go crazy with race prep. I ate a lot of donuts and pizza in the days before, because obviously I wasn’t going to miss out on the most enjoyable part of whole ordeal: CARB-LOADING! I drank a bottle of wine and ate fish tacos the night before, simply because I like wine and fish tacos. I might stick with just a glass of wine next time though…

Saturday morning dawned windy and wet, and we started the race in the dark. The 50K course is two 16.7 mile loops with five aid stations per loop. The first 5.5 miles and the last couple miles are hills…hills, hills, and more hills. The rain that had soaked the trails for the preceding 24 hours had turned everything into a muddy mess – people were slipping, falling, and occasionally losing shoes. I had never attempted to run terrain that challenging, and it took everything I had just to stay upright and keep moving. 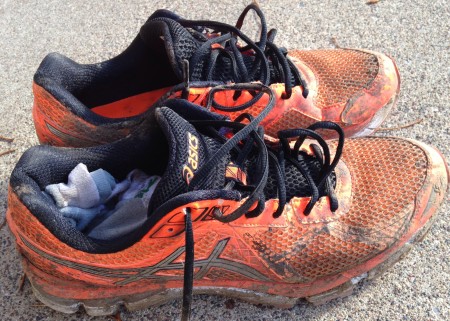 My running shoes AFTER a round of cleaning and scraping. It was a very muddy race.

I finished the first 16.7 mile loop in just under three hours, and I was actually feeling pretty good. I started the next circuit, and my second round on those hills destroyed me. My upper legs started cramping on the downhills, and my pace slowed dramatically. I fell in with two ladies named Janet (J-Squared), and we stumbled our way up and down the rolling terrain together until we reached the aid station at 5.5 miles.

Course map with aid stations marked. Not shown: all the damn hills and mud.

At this point, the course leveled out for about 8 miles, and I was feeling pretty good about my chances of completing the race in under 8 hours. I took about 10 minutes to stretch, hydrate, and eat some food, and then Janet 1, Janet 2 and I continued down the trail at a slow jog. We had only gone about 100 yards when my vision suddenly got blurry and I dropped to my knees, vomiting up everything I had in my stomach. I limped my way back to the aid station to refuel and rest for a bit, but had only been sitting down for a minute or two when my vision got blurry again and I blacked out.

When I came to, people were freaking out and covering me in coats while the aid station manager propped my feet up on a chair. Apparently, my body had had enough and decided to shut down for a bit. The race director drove me back to the start/finish line, and just like that my race was done.

I’m really not too bummed about the way things turned out. I more than doubled the distance of my furthest training run, and I did it on some crazy trails in shitty conditions. I had tons of (Type 2) fun, got a sweet new tshirt, and learned a LOT:

Here’s to finishing the next one!

I am registered for that race, so I SHOULD be writing a blog post about my last few months of training, or maybe my nutrition plan. Instead, I’m contemplating putting my phone down for a minute so I can get a donut to go with this cup of coffee. 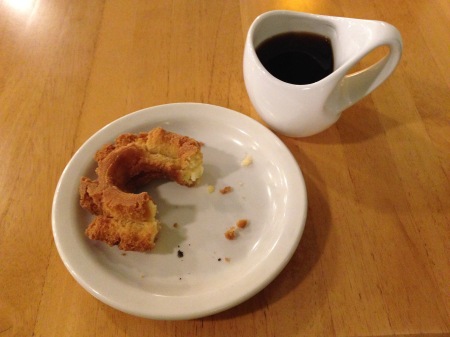 Ahh, that’s better. So about this race…I stopped training about two months ago, and that was only about a month after I had started training. My knees, already rickety from a childhood bout with Lyme Disease, were producing such an exquisite brand of pain that I honestly couldn’t take it anymore. In the last sixty days, I’ve run exactly four three mile loops near my house and one grueling four mile hill run at Barn Bluff in Red Wing, MN.

That’s hardly the normal mileage you’d find in a “Run Your First Ultra-Marathon” training plan, and I very seriously considered just dropping out. However:

With those compelling arguments to prop up my resolve, I am going to show up and test my theory: that all of the wine, pizza, and donuts I’ve consumed and my decent all-around physical condition will allow me to run/limp/walk/stagger 33.4 miles of winding, hilly trails on Saturday morning. My main goal is to finish, but I’m secretly hoping to complete the course with a sub seven hour time.

Or maybe I’ll just make it to the first aid station and hang out by the fire eating PB&J sandwiches and GU and cheer people on. Either way, I’ll post something about the adventure on Sunday. Wish me luck!