The north face of Granite Peak in August 2008. The Chadwick-Bowman Route goes directly up the face, just left of the main pillar.

“Where are you guys headed? We were going to try the standard route but with the weather…”

The bearded man in the bright blue jacket seemed to be the leader of the disheartened group of four. They had made the long approach up the switchbacks and across Froze To Death Plateau only to turn around in the face of the suddenly violent wind and the approaching storm clouds. I stood up a little straighter and answered the man cockily.

“We’re going to climb the north face of Granite.”

His face turned to disbelief. “In this weather, with this wind? You’re crazy!”

Loren, veteran of countless battles with the Beartooth’s weather patterns, just shrugged and turned back into the wind to continue the trek across the plateau. 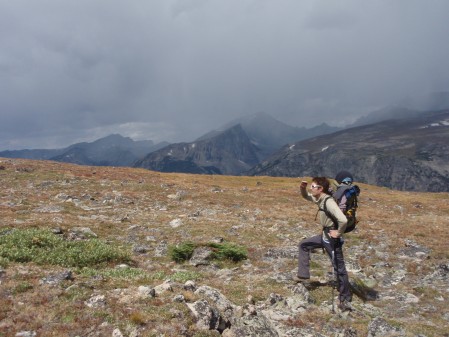 Loren checking the weather on the plateau as the wind started to gust and the first storm clouds rolled in.

“It’s like this all the time up here,” he called over his shoulder. “Might be better in the morning.”

“Well, we are headed down,” the leader said. A look of concern crossed his face as he studied me. “You boys be careful up there.” 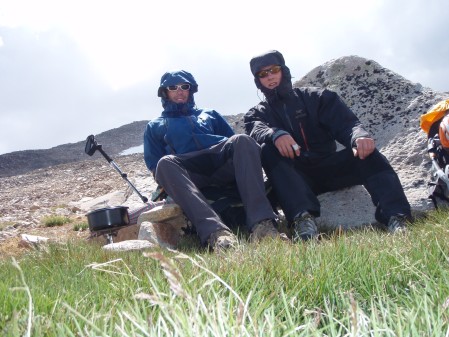 A quick stop for tea about halfway across Froze To Death Plateau.

Our bivouac ledge sprouted from the lower east ridge of the mountain in a surreal setting. The perfectly flat three meter by two meter table top seemed to have been tailor-made for our intentions. Rock walls soared above us from the back of the ledge, and a steep snowfield dropped off the front edge. It would be a bad place to roll off in the middle of the night.

“Good news, Bambi-Bags,” Loren said as he looked up from the map he had been studying. “We’re not lost. That big beautiful hunk of rock and ice in front of us appears to be the north face of Granite Peak, and all we have to do is climb right up the middle of it.” 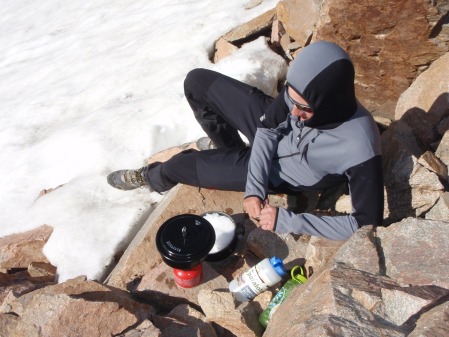 Melting snow to fill our water bottles from the glacier just below our bivouac ledge.

I grinned from my perch just below our ledge where I was melting snow to fill our water bottles. “Truly, brother, you’re a navigational genius. What time are we going to start climbing in the morning?”

He frowned. “Good question. We need to walk out tomorrow because we both work the next day, right?”

I laughed. “I didn’t tell you, but I am actually scheduled to work tomorrow. I guess I’ll have to tell them I got caught in a storm or something.”

“Priorities, brother, priorities. Hopefully you still have a job at the shoe store when you get back,” Loren replied with a chuckle. “Ok, let’s set the alarm for 0230. We’ll eat, rack up, and plan to be climbing by 0330.” 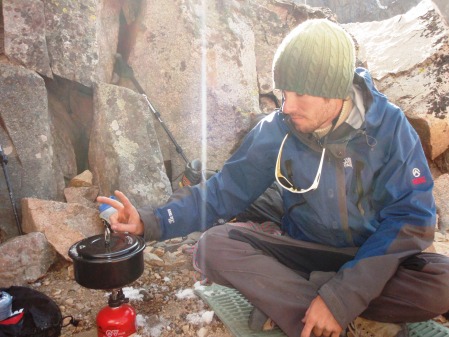 Loren brewing up yet another pot of noodles.

I nodded my assent. “So it’s time to eat a luxurious meal of noodles and sardines and then hit the hay. You can use the stove first, I want to get some photos of the sunset over the mountains.”

Loren tried to speak, but he couldn’t stop laughing. “That…” his sentence failed as a fresh burst of laughter overtook him. Finally he stopped and wiped the tears from his eyes.

I nodded with indignation. “You said light was right! So I went as light as I could!”

He burst into laughter again as he watched me try to fold the foil emergency blanked around my sleeping bag where it wouldn’t blow away in the wind.

“Bambi…that crinkly fucker is going to be flapping in the wind and keeping us up all night. And if it rains or snows, you’re going to get soaked.”

I digested his words for a moment as I surveyed my sleeping system. He was right.

“Maybe there’s such a thing as too light?” I asked with a grin.

“Maybe,” he replied, “but at least you’re devoted to the ideal.”

He laughed again as we both burrowed into our sleeping bags. The darkness of night was still a couple hours away, but the temperature was already dropping and the wind had picked up again. The alarm would wake us in less than seven hours…if we managed to sleep at all.